This handsome Wolfman was created in 1992 by Telco for Universal Studios Monster line. Wolfie as his friends call him is wearing a yellow long sleeve shirt with black buttons. He has olive colored long pants on, complete with a silver buckle.

And the cool thing about Wolfman is that he works! His eyes flash red and there is scary music. Wolfman takes 2 C Batteries, not included. The battery compartment is in the black base. His on/off switch is on top of the base in the front of his feet.

The base is approximately 4 3/4 inches in diameter.

He is in overall very good condition. It appears that he has all his hair. His shirt isn't totally tucked in in the back. There is also a wire poking through his shirt by the left elbow, which we have shown in the photos. We've also included a video to show that he works.

The battery compartment is clean with no corrosion. 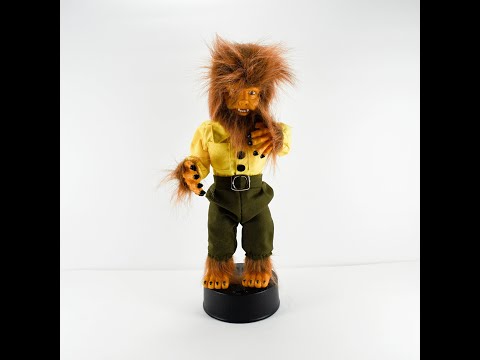 Video will open in a new window

Using the mobile app? Copy this link into your browser: