This set tells the story of a man and woman who meet, court and get married. Each card is numbered and has a caption.

2. Expected - Married Life as he pictured it (Music without Words).

13. Prospected - Visions of the Future.

14. As Directed - "After a Man's Married his troubles begin."

16. Deflected - Home from the Club he fears the Storm.

18. Dejected - Married Life as he found it (Words without Music).

Each card is copyrighted 1897. On the back of each card is caption in English and five other languages.

Each card is approximately 7 inches by 3 1/2 inches.

The cards are yellowed from age, some more than others. Each card is slightly curved. There is minimal wear on each one around the edges and on the photos themselves. Overall, in very good to good condition for their age.

Please see all the photos and video for more detail. 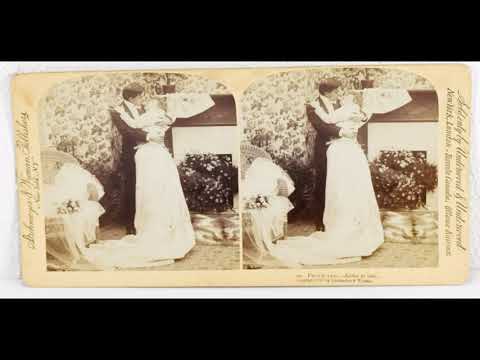 A story of romance and marriage with stereoview cards, the 1890's way.

Video will open in a new window

Using the mobile app? Copy this link into your browser: